Be On The Lookout for Japanese Beetle Emergence 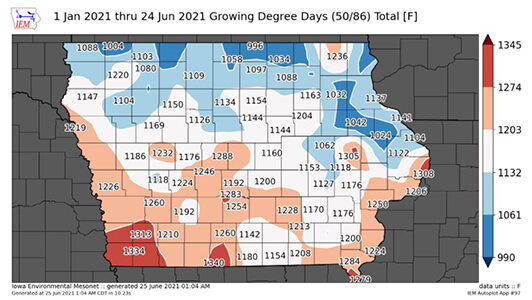 Japanese beetles are an invasive species that feed on leaves, flowers or fruit of over 300 species of plants.

Their life cycle starts as white grubs in lawns or pastures. The grubs overwinter in the soil and move closer to the soil surface in spring to feed on grass roots. Adults will start to emerge end of June beginning of July. We always start looking for them around 950-1050 growing degree units(GDU).

The female beetle will tunnel underground, where she will lay up to 60 eggs. Those eggs will turn into grubs and feed on grass roots till the weather starts to get cool. Dry soil can reduce egg survival. Therefore, we could see smaller amounts, this year, because of last fall’s drier weather. Grub damage will appear in patches in grasses. The grass will pull up easy because of the lack of roots.

Adult beetles can fly several miles to feed. They feed in clusters because the leaves that are damaged by beetles will put off a feeding induced odor to attract other beetles. Adult beetles will skeletonize leaves by eating in between the veins and they will also feed on fruit or flowers.

In row crop, we are worried about them feeding on soybean leaves and corn silks. We recommend using an effective insecticide like Endigo ZC in fields that have significant numbers of beetles present, or where significant feeding is occurring. When beans are small, the beetles can do much more damage in a short amount of time, so be vigilant. There may be an opportunity to use an insecticide in conjunction with your post bean spraying, but the beetles may not yet be present. Residual has some effect in deterrence, but most of the efficacy is from the contact kill that happens right when you make the application.

Prevent the damage before it starts. Talk to your local United Farmers Cooperative agronomist to determine the best defense against Japanese beetle damage in your fields.