About > News and Events > Latest Articles > Benefits of Fetal Programming 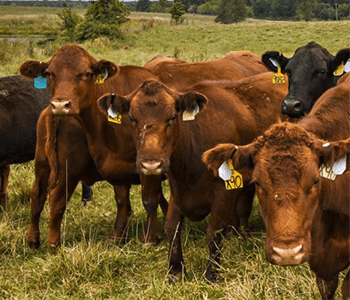 
With inputs at all-time highs, any low-cost opportunities that beef producers can capitalize on is a no brainer.  One of those opportunities exists are the genetics that are carefully curated and planned year after year.  If we can’t take advantage of the full genetic potential of our calf crop, money is left on the table. The idea of “fetal programing” is a simple one: in-utero nutrition plays a substantial role in maximizing genetic potential. In short, “maximizing genetic potential” means more pounds, and more pounds means money.

Fetal programing originates in an observed phenomenon that resulted from a 3-month military blockade in the Netherlands during WWII that affected 4.5 million people. After the war ended, researchers identified and tracked the lifetime health of the children that were in-utero during that time.  The results were staggering.  They found that pregnancies that were nutrient deprived during the first trimester resulted in children that had significantly higher incidences of cardiovascular disease, high cholesterol, and obesity.  Deprivation into the second and third trimester resulted in children that were more likely to be diabetic and had greater occurrences of kidney disease and asthma.  The field of Epigenetics is what resulted from this study; the premise being that although genes are constant, environmental factors, such as nutrition, cause genes to express themselves differently, leading to altered phonotypes.

The same principal stays true as this is studied in beef cattle.  Genetic potential is significantly limited in different ways when nutrition is insufficient during each trimester of pregnancy.  During the first trimester, the total lifetime number of viable oocytes are developed in heifers.  This decreases dramatically when developed during times of insufficient nutrition.  During the second and third trimester, poor nutrition negatively impacts muscle and fat cells, resulting in lower weaning weights and decreased marbling.  And the weight disadvantage doesn’t just impact the scale.  Studies show that heifers retained out of cows on a higher nutrition plane have higher pregnancy rates, calve earlier, and calve easier.

Most ag economists agree that reproduction is the key driver of cow herd profitability, and we all know that we are paid for pounds at the end of the day. Taking advantage of the genetic potential of your cow herd may just be one of the cost-effective ways to be as profitable as possible in the cattle business.  A good mineral program and proper supplementation at critical times of year could be the best investment you make.

Each beef producer is working with different variable in their respective programs. No two operations are alike.  Please contact your United Farmers feed representative to have a conversation about how to navigate your specific goals and challenges.  We are here to serve our producers!